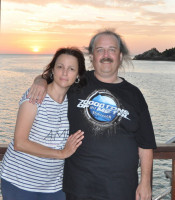 Brachypelma annitha n.sp. and Brachypelma hamorii n.sp. (Mexico) show morphological differences with B. smithi although visually closer to the latter. Spermathecae and copulatory organs of males are food for thought. Indeed, if the spermathecae of hamorii are distinct, those of annitha are not. On the other hand, in the copulatory organs and tibial apophysis, the opposite is true: where the bulbs and tibial apophysis of annitha are distinct from smithi, in contrast those of hamorii are similar to the latter making it possible to consider including these as a subspecies in the genus.