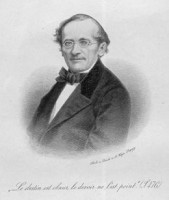 Josef Anton Maximilian Perty (17 September 1804, Ornbau – 8 August 1884, Bern) was a German naturalist and entomologist. He was a professor of zoology and comparative anatomy at the University of Bern.[1] His first name is sometimes spelled as "Joseph". He studied natural sciences and medicine in Landshut, earning his medical doctorate in 1826. Afterwards, he obtained his PhD at Erlangen with a thesis on a previously unknown species of beetle,[1] and in 1831 became privat-docent of zoology and general natural history at the University of Munich. From 1833 to 1876, he was a professor at the University of Bern.[2][3] He conducted investigative studies of arthropods collected by Johann Baptist von Spix and Carl Friedrich Philipp von Martius from an expedition in Brazil.[1][3] In 1862, the botanical genus Pertya was named in his honor by Carl Heinrich Bipontinus Schultz.[2]