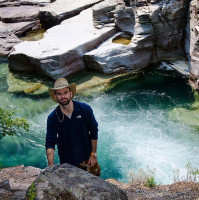 The Neotropical genus Hapalotremus Simon, 1903 (Araneae: Theraphosidae), with the description of seven new species and the highest altitude record for the family

New specimens of the genus Hapalotremus (Theraphosinae) are revised based on the examination of types and additional material collected in Argentina, Bolivia and Peru. A new generic diagnosis is proposed. New information and illustrations are provided for known species and seven new species were recognized and are newly described and illustrated. Hence, Hapalotremus comprises 10 valid species, distributed along the Andes and Yungas in western South America. All species are keyed and mapped. New taxonomic features are included in the descriptions and the detail of embolus keels morphology and positions are described for the first time for the genus. Information on species habitat is included. The highest altitude record for a Theraphosidae spider, living at 4524 m above sea level, is reported.