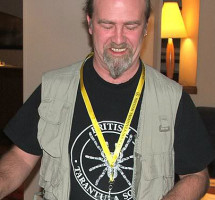 A new species of Cymbiapophysa Gabriel & Sherwood, 2020 from Colombia and a transfer from Proshapalopus Mello-Leitão, 1923 (Araneae: Theraphosidae)

The revised taxonomic placement of the genus Acentropelma Pocock, 1901 and restoration of the genus Pseudoschizopelma Smith, 1995 (Aranei: Theraphosidae)

The genus Acentropelma Pocock, 1901 is redefined and the type species, A. spinulosum F.O. Pickard-Cambridge, 1897 is redescribed. Pseudo- schizopelma Smith, 1995 gen.rest. is restored to house Acentropelma macropus (Ausserer, 1875) creating the restored combination Pseudoschizopelma macropus comb.rest. Acentropelma sorkini Smith, 1995 syn.n. is considered a junior synonym of P. macropus based on indistinguishable palpal bulb, tibial apophysis and sper- mathecal morphology. The paratype female of former A. sorkini, originally designated and described by Smith [1995] is found to be an immature Brachypelma Si- mon, 1891 – possibly Brachypelma kahlenbergi Rud- loff, 2008. Additional morphological features for A. gutzkei are included to complement the original de- scription by Reichling [1997], and its placement dis- cussed.