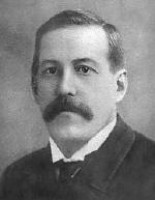 His father was an Irishman who settled in South Africa and his mother belonged to the Hertzog family. Although he was born in England and partly educated in Germany, Purcell's background was completely South African, and he is rightly regarded as one of the earliest South African scientists. The subject of his doctoral thesis was the Arachnida, and most of his collecting and research dealt with this group in which he was a pioneer in South Africa.

In Schultze, L., Forschungsreise in Südafrika, 1(2).

Descriptions of new genera and species of South African spiders